Rakesh piles guilt on Lachlan, trying to find out what he knows, but Chrissie interrupts. Naive Rakesh tells her his suspicions and she insists on talking to Andy. In Prison, a two faced Chrissie assuages Andy that Lachlan would have told her if he did it. He accepts this but is frustrated there aren’t other suspects, giving Chrissie an idea. Soon malevolent Chrissie turns her talons on Rakesh when she works out what he’s done with Mill. Rakesh panics to realise Chrissie still has him over a barrel, despite him having worked out her agenda regarding Andy. Chrissie has Rakesh exactly where she wants him...

Lisa’s nursing a hangover and tries to hide her hurt from Belle and later Zak as she returns his hat. Chas suggests to Zak that Lisa isn’t coping as well as she makes out. Meanwhile, Joanie’s in a bad way too. Zak finds Lisa outside the Dingle’s and tells her he’s still there for her if she needs him. Later, Joanie runs into Lisa and soon Lisa’s made a decision.

Rhona suggests Pierce returns his poker winnings, though he resists. She is troubled to receive an anniversary card from Paddy and decides to tackle the subject. David re-proposes to Tracy, but she’s upset not to have family around for a wedding so David tells Leyla his plan..​​ 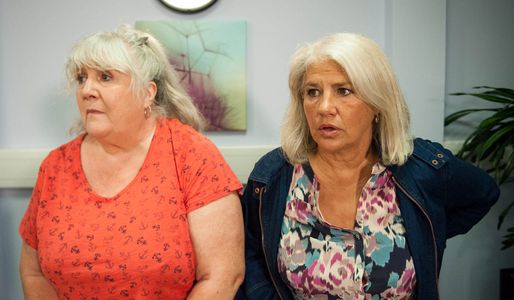