Emmerdale 11/01 - Things Can't Get Any Worse For Chrissie

Chrissie is close to tears as she tellsLawrence that Lachlan has been attacked. Defeated, she pleads with Cain to leave Lachlan alone if she signs over the garage. Chrissie signs it all away but is later shocked by Lachlan’s confession.

Ronnie is horrified to learn that Lawrence was in on framing Andy from the start. Ronnie storms out, leaving Lawrence tearful. Meanwhile, in the Young Offenders Institution, Lachlan is shown a way to get out of jail. Will Lachlan doit?

Tracy’s sick of Finn wallowing and tells him she's booked him a haircut. When they go to the salon Kerry’s jaw drops when, bronzed Adonis, Nathan enters but will Finn show interest?

Charity plays hardball with Leyla when she tries to set up a hen do at the pub. Later, Chas wonders what Charity has planned. Frank hopes he and Vanessa can start again.​​​ 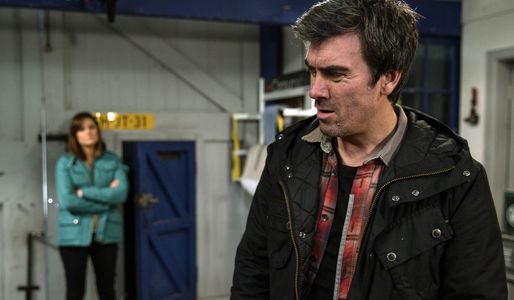