Pollard and Val are tense with each other and Eric confides in Diane. He opens up to her and decides he won’t let Val’s illness ruin their marriage. With a new sense of purpose, Pollard tries to woo Val. He suggests they go upstairs, and Eric assures her he is ready, but is he? Will Val be able to handle the rejection if not?

Pete and Debbie keep their meeting secret and agree to meet again. Later, Ross is surprised when Debbie doesn’t hold a grudge about his behaviour and agrees to go and have a drink with him at the pub. At the Woolpack, Ross is suspicious when Debbie heads off, saying she has other plans.
​
Elsewhere, The Dingles remain confused as to why Lisa has taken Belle away. Dom struggles with his grief as Zak tries to comfort him. Marlon and Paddy hatch a plan to get the pigs back, but will they be successful. 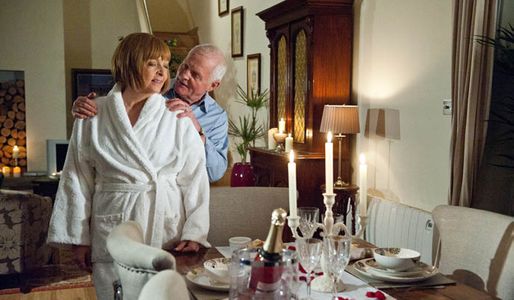 Emmerdale 11/03 - Is it all too late for fatherly advice?