Emmerdale 11/06 - A confused Debbie visits her mum in prison

Debbie argues with Pete, telling him to give her some space. Later, Ross confronts Debbie about their kiss but she denies there’s a spark between them. Debbie is utterly confused what to do. Cain advises Debbie to stay away from Ross, likening their relationship to his and Charity’s. Debbie goes to visit her mum in prison, where she tells a shocked Charity she is cheating on Pete with Ross. Charity’s trying to get her head round Debbie’s news when Debbie asks her mum for advice. However they are interrupted by the end of visiting hours. Later, Debbie is dropped a bombshell by her mother.

Kirin ushers out the latest girl he spent the night with and Rakesh is taken aback by Kirin’s attitude. Vanessa sees but ignores as he quickly kisses Ellie. Later, Vanessa is preparing for her scan but she can’t help thinking of Kirin. Meanwhile, Kirin plans a party, determined to block out his pain. Vanessa returns from her scan with the pictures, sad about having the baby alone.

Rachel’s rattled when she receives a letter, inviting her to mediation for Archie. Her heart sinks that Jai is fighting for full custody. Megan questions why Jai is rushing, unaware of his real intentions. A fragile Ashley is home from hospital but nervous about having a seizure in public. Tracy and Val grin at Finn’s discomfort when they tell him their surprise treat for Pollard’s birthday.

Carly attempts to break the ice with Ross but he rejects her and texts Debbie again. James warns Ross over wanting Debbie. Meanwhile, a stressed Debbie tries to cope regarding the bombshell dropped by Charity. The Dingles are in a state of confusion over matters whilst Debbie brims with angry tears. Cain is brooding. Whilst Debbie having been turned down by Ross and needing support turns back to Pete who proves he is there for her.

Kirin’s teenage party starts to get out of hand but Kirin doesn’t care. Priya heads home and is gobsmacked when she walks into the party, ordering everyone home and Kirin to clean up. A drunk Kirin tries to kiss Priya. Will she tell Rakesh what Kirin has done.

Rachel vows to keep custody of her son. Whilst Jai decides to play dirty to win. Ashley is not coping and Harriet and Laurel are concerned, reassuring him everything will be okay. Finn makes excuses to get Pollard to his surprise party. But Val’s montage doesn’t go quite to plan. 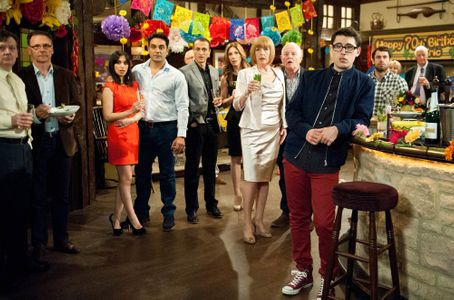 Emmerdale 26/06 - Debbie is confused by her feelings