At the hospital, Vanessa and Kirin are shocked when the doctor says they’re going to let labour progress naturally. Vanessa tries not to panic and wants Kirin with her. The midwife and Kirin try to reassure a scared Vanessa as she’s about to be taken to the delivery suite. Adam and Victoria arrive back home and Adam’s perturbed to see he has 28 missed calls. Emotions run high at the hospital and later the doctor explains that the baby is stable but they need to take it hour by hour...

David takes a box of Alicia’s stuff round to Leyla’s. David goes over to the B&B and tells Pollard he’s staying in the village and has bought the shop back. Pollard notices his upset and reluctantly tells him to take a seat. He’s angry at David for letting Alicia go when he had no choice when he lost Val, it’s clear Pollard is still in a bad way.

Sarah’s annoyed she can’t see Pete so guilty Debbie tells Pete he can say goodbye to the kids for good tomorrow.

As Marlon bins anniversary cards, he worries how Laurel will cope with the divorce, but later seems a little put out by how well she appears to be taking the separation. 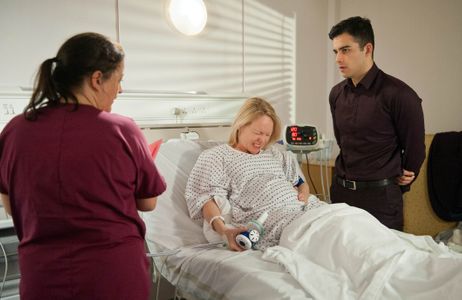