At Bob's birthday treasure hunt, Ashley falters as he has a blackout and stumbles, unaware of what's happening. He continues in a state of confusion and staggers into a road as a car slows down. Later, in the pub, Doug returns and Bob's alarmed when he realises Ashley hasn't come back from the treasure hunt. At the hospital, a doctor explains to Ashley he had a mini-stroke and he makes a hasty departure on his own. Bob, however, is still worried and is about to tell Harriet the truth about his condition when he returns, saying he got waylaid with parish business. Bob's appalled to hear about Ashley's mini-stroke, not wanting to keep his secret anymore.

Ross is confident looking after Moses will be a breeze but when Emma offers to take him for a while, seeing her desperation he gives in. Emma's keen to make a deal where she gets to look after Moses regularly but Ross makes her swear Debbie won't find out. Later, Debbie's pleased Ross has done such a good job and suggests it could become a regular thing omitting to tell her his deal with his mum.

Joanie is delighted as she tells Lisa she got a job at the factory. Guilty about her own feelings, Laurel suggests Harriet should talk to Ashley about spending the rest of their lives together but is floored when Harriet says she's going to ask Ashley to marry her. 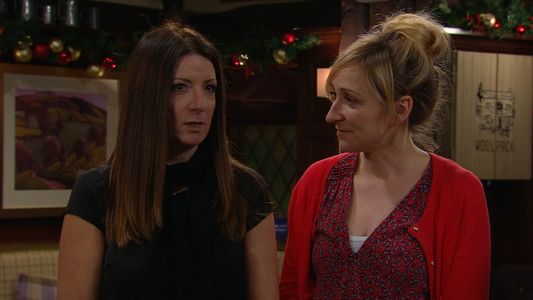