Lawrence is relieved Ronnie is there for him band tells Ronnie he is going to take the blame. Ronnie refuses to let that happen and locks him in. In court, panic spreads as they wait forLawrence to turn but Lawrence is still locked in - how can he get out of this situation?

Robert walks in on Jimmy and Nicola in an intimate moment. He tells Jimmy to get to the yard. Jimmy dissuades Nicola from taking a look at the books but Nicola has other ideas and wants future interest in the business..

Finn reveals to Pete and Emma he has a date and they’re pleased unaware it’sTracy’s male escort. Megan is angry when Charity and Chas try to make money from her event. Lisa is struggling in her relationship and Rhona tells Bob why she’s tired, aware she needs to get the energy up for hunk night tonight.

Ronnie musters allhis strength to push through the door to get to Lawrence who he believes has had a heart attack - but has he? And what will happen to Lachlan if Lawrence doesn’t make it to court?

Finn approaches Kasim at the bar and tells him he's on a date with Nathan who sits in the corner. Finn hopes he detects a hint of jealousy. Tracy worries when Finn says he’s seeing Nathan again. But can Finn retain a friendship with Kasim?

Rhona suggests she and Pierce make the most of being home alone later, but Pierce is thrown when he finds her ticket for the hunk night the next day. He reacts badly and Rhona's unsure of his attitude. Pierce says he’s going into work later but is he avoiding her?

Nicola's fired up after her visit to the portakabin. Jimmy soon dreads her interfering with the business. Charity senses all is not well for Zak and Lisa's relationship.​​​​​
​ 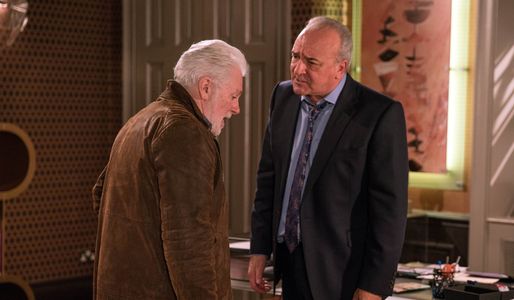 Pascale Day
…
Emmerdale
For all the best videos, memes and shareable news!