Zak and Lisa worry when they discover Belle hasn't been home that night and hasn't got her phone or her medication with her. As a search party gathers in the Woolpack, young Samson finds Belle. Belle is angry and warns him to stay away and keep his mouth shut or she’ll hurt him. Explaining she always ends up killing someone. Samson runs away, terrified. Will he keep her secret? Meanwhile, a tormented Belle has over things on her mind but what will she do next?

In the café, Finn tells Emma his dad's had a word and he's decided not to give up on her at the first sign of trouble. However, James tells Chas he plans to ask Emma for a divorce but how will Emma react?

Jacob has plans for a picture book for Alicia's birthday and Lachlan is enthusiastic to help. David realises he's forgotten Valentine's Day and rushes off to sort something. Later, David's ordering flowers for Alicia but could his plans be thwarted?

Pearl worries about her expensive heating bill. Debbie leaves the kids with Andy, telling him he's getting help whether he likes it or not.

At derelict Wylie's farm, everyone looks up at Belle who is dangerously close to the edge and she's panicked by the amount of people watching her. Lisa has an angina attack whilst waiting for the emergency services. Meanwhile, Harriet using her old police training tries to talk Belle away from the edge while Cain sneaks quietly up the stairs. As sirens are heard in the distance, Belle loses her footing…

Victoria offers Adam help with the scrap yard's opening party. Adam refuses, saying she needs to be there for Andy and he worries about how Victoria's really bearing up. Meanwhile, after the recent confession, one resident makes a choice….

Sarah asks Andy questions but he breaks down, asking Debbie to take the kids away.

Chrissie invites David and Alicia for dinner but David is not looking forward to it. At Home Farm, Chrissie's optimistic as she tells Lawrence her plan to open up a farm shop, a franchise of David's.

In the Woolpack, Emma doesn't take James' request for a divorce too well, leaving James exasperated. Angrily in the toilets, she rips the paper towel dispenser off the wall, pleased by the damage Chas will now have to face but as Emma arrives back at the table we see a different attitude.

Rhona offers Pearl an advance but she refuses. Rhona then asks about Katie’s bill but Pearl says she'll deal with it. Pearl looks at the cash envelope in her pocket, guilty. In the pub, Sam's stuck in the middle of an argument that Tracy is involved in. 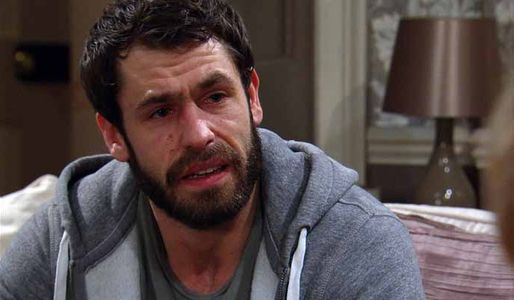