Alicia’s actions are taking their toll on Lachlan when he is set upon by a couple of lads. Lachlan takes refuge with Belle who shows him what Alicia has done but is shocked by his attitude to it all. Alicia confesses what she has done to a shocked David. Later, Alicia pulls up in her car as Lachlan is being surrounded threateningly by a group of lads. Realising this is of her doing will Alicia help him?

Chrissie is shocked when she discovers what Alicia has done. Meanwhile, Chas is proud when Aaron tells Robert that Chrissie was right to get rid of him. Angry and drunk, Robert demands his money back from Ross. Aaron later tries to support a drunk Robert and brings him some water but when Robert goes to kiss him how will Aaron react?

Emma is put in a tight corner when Finn confronts her with Ross over Chas’s stolen passport. Knowing the mugging was also a fake; Finn insists Emma come clean to James about the missing passport having been down to her, threatening otherwise he will. Emma is in a panic over what to do, until she overhears a suspicious conversation between Debbie and Ross. Delighted it gives her collateral.

Ashley takes a lasagne round for Laurel but is worried when she offers him a drink. 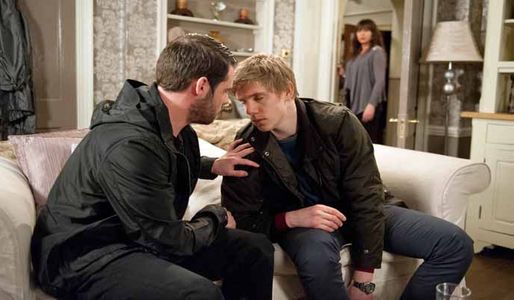 Emmerdale 15/05 - Lachlan appears to be in a bad state