Jai and Rachel argue and after failing to agree on custody Jai threatens to kill her. Rachel rushes away scared. Leyla reveals herself, having overheard everything. Jai tries to calm Leyla, lying he has never meant to harm Rachel. Leyla remains wary but Jai reveals he has a plan. Later, a shaken Rachel tells Sam that Jai threatened to kill her, determined to use it against him at the mediation meeting. Unaware, Jai has a new plan as he then spikes Rachel’s drink.

Jai and Megan are left shocked by Lisa’s news. Meanwhile, a guilty Debbie is touched by Pete’s support.

James admits his regret at the way he treated Emma in the past leaving her hopeful that he wants to try again. Kirin apologises for last night, unable to look at Priya. Rakesh’s guilt over Kirin is piqued when he consoles Kirin over Vanessa. Pollard covers his hurt about not receiving a card from David so Val sets up a surprise call but nearly lets the cat out of the bag. Ross goes to see Carly and they kiss. 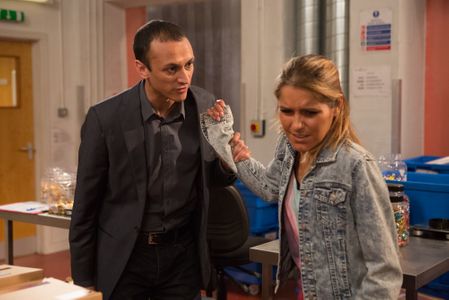