With no way out a desperate Rakesh makes preparations... He gives his grandson a toy of Kirin’s and holds him for what he thinks will be the last time. Will Rakesh go through with it or will he finally confess all to Priya?

Emma finds her old wedding dress and asks James to do wedding planning while he’s recovering but she’s disappointed when he less than enthusiastic. Emma overhears James calling Moira and is hurt. She brings him her homemade apple pie but ashe tells her she’s too good for him, there’s a guilty look from Emma...

Robert fills Aaron in on setting up Rebecca as his spy. He pressuresRebecca to get a DNA test for Lawrence, desperate for some leverage with Chrissie. Elsewhere, Moira warns Cain to stay away. Paddy and Marlon plan a camping trip with Leo andPaddy’s chuffed when Rhona invites him to Leo’s play.​​ 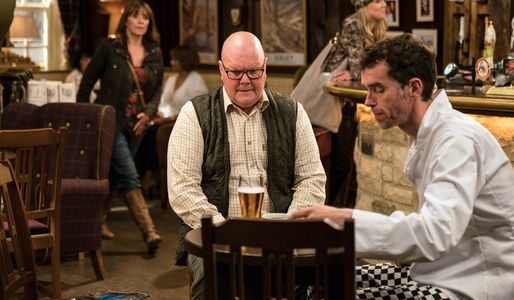