Aaron fumes as Robert fills him in on the contents of Gordon’s letter. Liv overhears a conversation that could have major consequences for Robert. Nicola forces Carly and Jai to have a drink together as she gloats to Jimmy.But when Carly struggles to stay interested, Charity takes pleasure in revealing to Jai that Nicola’s paying Carly to have a drink with him. Charity winds Jai up so much that he eventually snaps at her,just as Megan walks in.

Vanessa tests Rhona’s feeling’s towards Pierce as Carly flirts with him. Ross pulls up in MainStreet in a Barton cab, he tries to persuade Pete to stay in the village and work together with him in the business​ 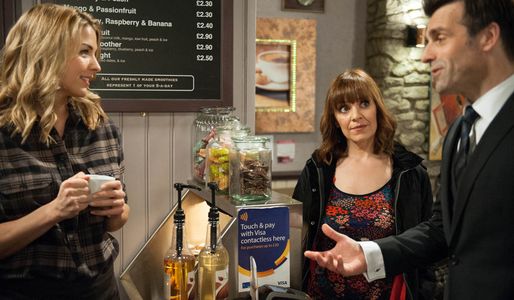