Pete remains determined to cheer Finn up as the three brothers arrive at a gay bar, which was Finn’s choice. Ross is out of his comfort zone and he and Pete are awkward with each other as they discuss their Mum. Before long Ross gets himself into a fight. Emma arrives and tends to Ross’s wounds but neither of them know who the other one is. Finn is shocked to see Emma and she’s stunned to recognise Pete and Ross for the first time. Pete is annoyed when Finn invites Emma back to the village. Ross later reveals to Emma how Moira and James slept together before she left. Will Ross regret opening his mouth?

At the hospital Charity frets over the day ahead. Moira arrives and is surprised to find Charity already there but is irritated by her presence. Will Cain pull through his risky operation and just what is Charity playing at?

Aaron is envious to see Victoria and Adam together. Robert reveals he has put the business money into Adam’s account, but a worried Aaron is distracted, leaving Robert puzzled. That afternoon Aaron tells Robert he can’t go through with the business, adamant that it will only come between them. but he’s left thrown when Robert reveals his feelings for him... 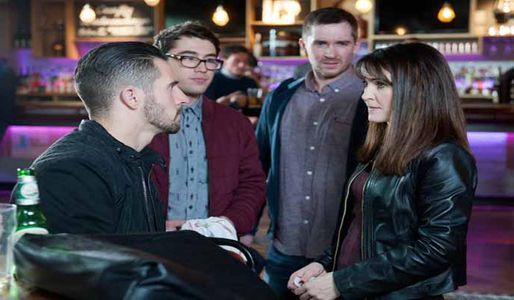