Emmerdale 13/03 - Another let down for Vanessa

Vanessa feels a million miles from Kirin having not seen him since she revealed her cancer scare. She tries to talk to him and asks if he will take her to her appointment and he agrees but later lets her down. When Vanessa finds out Kirin has lied to her, will it make up her mind?

Lisa's excited as she prepares for Belle's homecoming but is concerned when Belle heads straight upstairs. Sam feels bad for not staying and welcoming Belle but Rachel tells him he needs to start putting Samson first.

Finn tells Darren it makes no difference to him that's he's HIV positive and asks him out for a drink regardless. Darren agrees and they go to the pub, sharing a kiss but Emma sees and is concerned for her son…

Fed up of having Tracy and Andy rub their relationship in her face, Chas snaps, and bans Tracy from the pub. She then snaps at Aaron telling him she's told Robert to stay away. She later apologises but Aaron’s still haunted by his part in Katie's death.

Paddy agrees to invest in the horse rehabilitation business, and Andy says he can buy Katie’s stables. However, Paddy can't access his online banking and Pearl tells him she lost the password but when he calls the bank and arranges an appointment, Pearls worried the net is closing in on her...

Chas agrees to do a charity half marathon with Aaron. 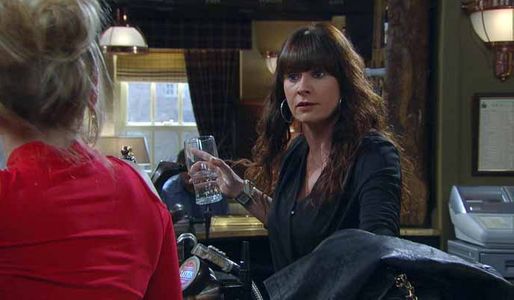