Priya’s plans for an arranged marriage are still on her mind, much to Rishi’s worry but when Leyla overhears, she tries to dissuade her friend from making a hasty decision. Realising how hard it is being a single mum, Rishi interviews a nanny but Priya is furious when she finds out, persuading him instead to help her find a husband. Will Rishi agree to his daughter’s demands?

With April’s financial future playing on her mind, Donna agrees to the job with Ross. Seeing them together, Marlon thinks Donna has something on him. Later, she goes to see Ross to give him more information but Ross has other plans and is soon pulling her in for a passionate embrace.
​
In a bid to make amends, Andy takes Bernice some flowers to the salon but soon resorts to a sit in protest until she gives him another chance. Feigning a smile, Bernice suggests he’s forgiven and takes him into the back for another massage but Andy is soon left less than comfortable when she waxes his legs in revenge.

It’s a big day for Donna as she talks Ross through the last minute details of the robbery, which is on the same day as the Christening. Later, Ross is unaware he is being watched as he prepares to enter the jewellers and is taken aback when his balaclava is ripped off after the robbery by George. Arriving home, Ross heads straight for the sink, washing off the dried blood on his hand but is it his own or someone else’s?

The Dingles prepare for Belle’s sentencing, whilst Sam battles with his own criminal charges, finding an unexpected friend in Sean whom he confides in. Dom sits with the Dingles in court and all are shocked with Belle’s sentence. Back at the village, Zak finds Dom leaving the village and is unable to persuade him to stay. How will Zak cope with all the recent events in his condition?

Moira and James are left to man the pub as the Dingles all go to Belle’s hearing, but tensions are still high between the two. Later, Cain is surprised to see James has a caring side.

Priya continues her search for a husband, persuading Rishi to keep it a secret between them for now. 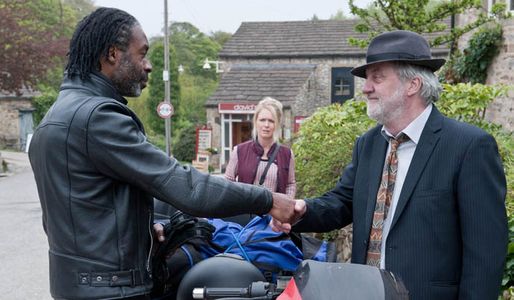