Emmerdale 13/1 - Belle tries to get her parents to speak

Belle tells Zak that Lisa had an angina attack and says that only he can put things right. Zak's torn when Joanie later tells him seeing Lisa could make her worse and he becomes convinced staying away might be the kindest thing to do. Belle, is furious Zak changed his mind and slaps Joanie. Zak is worried about Belle’s state of mind, will she use this to her advantage?

​Rhona visits Tess at the school and asks her if she would be a referee for their adoption. Tess feels trapped but will she agree?

Nicola admits to Rodney she was devastated about not being able to have more kids and doesn't feel happy about raising Elliot. Blissfully unaware, Jimmy becomes sad he lost touch with his other son Carl and decides to call Juliette to see how he's doing. Juliette later arrives with Carl, telling Jimmy she's glad he called as she's been struggling since her partner left and thinks Jimmy could be the answer to her prayers. Nicola is aghast to see Jimmy has now taken Carl in as well!

Rakesh is shocked when Rishi tells him Priya might never come to terms
with what he did to Kirin and Vanessa. Kerry admits to Joanie how she's lying to Bernice about her eye playing up. Cain tells Moira he will put her kiss with Pete behind him. Finn tells Moira he won't forgive her. 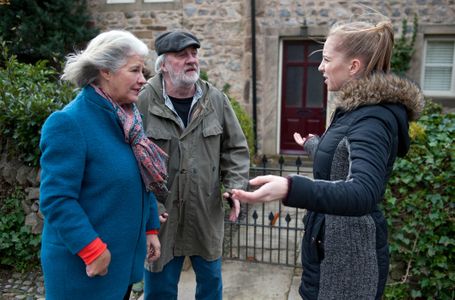