James awakes groggy and is worried he won’t make a funeral. Emma promises she’ll wake him but later he overhears Emma tell Pete he’s fast asleep and can’t make the it leaving James feeling uneasy. Emma refuses to give James his phone and he’s aware she’s up to something but has no idea what lengths Emma will go to. It is not long James finds out when he lets the cat eat his food..

At last Jai and Rishi learn the truth of the debts and Rakesh’s situation. Rebecca tells Robert she’s sent off the DNA sample and is thrown to see how closeAaron and Robert are.

Emma avoids answering James’ question and heads upstairs. James tries to leave but slips falling onto his broken leg and screams in agony. Emma pretends to call for an ambulance but instead sends a text to Pete from James’ phone before crushing it. James sees from upstairs and realises he’s a prisoner in his own home...

Charity suggests she and Cain go and get drunk in town. Cain hesitates but agrees and Charity’s relieved to get him alone. Harriet tells Laurel and Ashley there is a problem with the church so Ashley books another church for Dotty’s christening next week. Aaron and Robert are uncomfortable when talk turns to marriage. Rebecca tries to get Lachlan to go out to the pub with her.​​​ 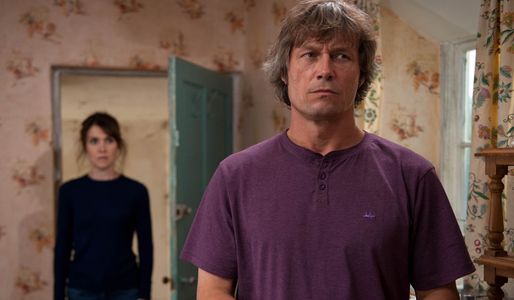