Moira assures Adam she’s okay with him moving back to Keepers but as he leaves, it’s clear she’s not as fine as she was making out. Moira can’t resist going through old boxes and finds a Christmas bauble that Holly had made. Moira tries to get on board with Emma’s bigChristmas plans, but she’s furious when Emma ends up accidentally breaking Holly’s bauble. Moira flips and kicks Emma out. Later, Moira closes the freezer doors as she finishes work for the day, but a vengeful Emma has other ideas what will she do?

Laurel feels guilty at the prospect of getting a carer in, but Nicola reassures her she’s doing the right thing and Laurel feels happier after having a conversation with Emily who tells her she regrets not getting help in for her husband sooner.

Chas and Aaron clear up after a rowdy party and Aaron concedes she was right about Liv and resolves to keep being firm with her. Liv tells Bernice about Gabby being bullied but feels wretched when Gabby gives her a filthy look and Aaron refuses to believe Liv when she tells him she was sticking up for Gabby.

Leyla and Vanessa slyly change the stock list Frank’s been ordering on the laptop but soon feel bad over what they’ve done. Can they change it back before Frank hits the send button? Bernice shows Lisa the dating website she’s perusing, leaving Lisa thoughtful.​​​ 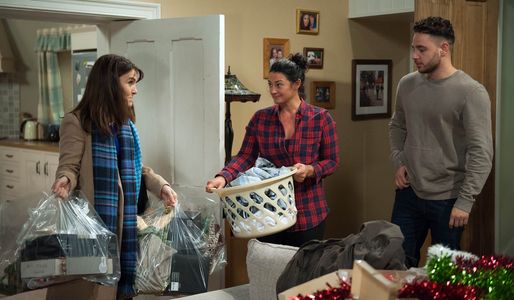