On the stand, Gordon makes an emotional appeal, making claims about Aaron. Sickened by Gordon's lies, Aaron tries to control his breathing as the case takes it's toll. Chas tries to bolster Aaron as he starts to lose hope.

Lawrence is thrilled to be leaving hospital but thrown to learn from Bernice that Andy's staying at the house. He and Bernice are uneasy but know they can't protest under the circumstances. Meanwhile, at Home Farm, Chrissie discovers a leak and pulls up Ronnie Hale's number, knowing he’s a plumber..

Rhona’s fixed on Paddy when he takes a phone call and Vanessa's pained to see her friends lack of trust for her husband. Paddy later heads out for a vet visit and Rhona covers to Vanessa and Marlon that she has left her purse at the shop, leaving the house. Will her friends be able to help her with her trust issues when Rhona admits to following Paddy? ALSO: Dan steels himself to talk to Zak and Joanie about them moving out.

In court, everyone watches as Liv takes the stand. Will she defend her brother or father? Soon the prosecution and defence give their closing arguments to the jury as Chas and Robert hold Aaron's hand. Back at the Woolpack, Cain wonders if Chas is okay with Robert and Aaron spending time with each other but she's happy Aaron has something to take his mind off things. Robert tells Aaron he is there for him whatever happens but will Aaron agree to give things another go?

Nervous Chrissie can't help but quietly scrutinise Ronnie who has arrived in all innocence to fix the leak, awkwardly aware he could be her father. She soon learns some facts from him and there's a sense she's decided she already likes him. How will Ronnie react when Chrissie shows him a photo of her mother?

Zak lets himself into the Dingles and takes a few trinkets, along with the Dingle pot. He tries to sell the heirlooms onto Pollard in the café but the pot is the only item worth anything. Pollard offers him £100 for it but there's a sense it's worth a lot more. Will Zak sell it?

Lawrence is struck by Chrissie and Andy’s closeness. Pearl tells Paddy and Rhona there are loads of negative reviews about the surgery online and Rhona has an idea who's behind it. 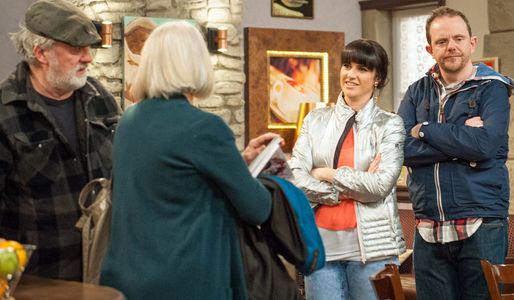