Robert wants to look his best for his meeting with Chrissie. While out for a walk together, Chrissie suddenly turns on Robert, locking him in an out-building, seemingly determined to make him pay for what he did. Robert realises Chrissie overheard his conversation with Aaron and is shocked when she picks up a petrol can and opens it. Angry Chrissie pours what looks like petrol all around a terrified Robert as Lachlan watches what is happening, unseen. Filled with fury she takes out the box of matches but will Chrissie really go through with it?

Pollard's shocked to discover David and Alicia are thinking of moving to Portugal but David, who is secretly not so keen for the move, tries to jeopardise the plans.

Pete is grateful to Debbie for inviting his mum to the party. But at the garage, Debbie tells Ross about Emma blackmailing her and is annoyed to learn she's blackmailing him too. Debbie has a plan and invites Carly to the party mentioning Ross will be there. When Carly arrives Ross is unimpressed, knowing exactly why Debbie invited her. However, he’s in for a further shock when Charlie suddenly arrives.

Lisa and Jai are sick of Rachel’s attitude and Sam’s troubled when he wakes her from a nightmare but she plays it down, wanting to forget about it but Sam is still left troubled.

Matters are made worse by the fact Charlie has brought two heavies with him and demands his money back from Debbie and Ross. Wanting to protect Debbie, Ross gets in the car with him, alone. Cain witnesses it all and demands to know what’s going on as everyone begins to wonder where Debbie, Cain and Ross are. Pete goes to investigate and escorts an uneasy Debbie back to the party but just where is Charlie taking Ross and how can Debbie stay at her party knowing Ross is in danger?

Lachlan then arrives and Robert's guilty when Lachlan says he was the closest thing to a dad and later a worried Chrissie tells Robert that Lachlan's missing and he blames himself for everything. She calls the police. Robert makes the most of the situation to make things up with Chrissie and comforts her. Alicia and David are stunned when PC Stone arrives in connection with Lachlan’s disappearance but unknown to them he’s in an empty barn with matches and petrol cans. What will he do next?

Rachel admits to Sam she's been having nightmares and is delighted when he suggests he live with her.

David admits to Priya he doesn't want to go. Alicia comes to a realisation. 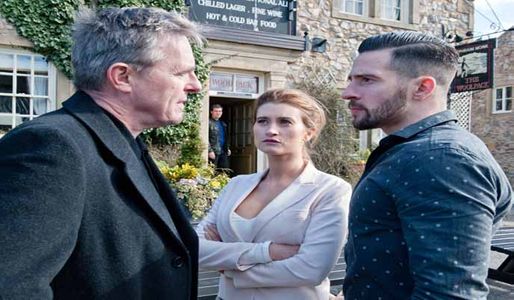