The festival is imminent and Declan's stressed out about his lack of investors. When Robbie has a suggestion, Declan shoots his idea down before the police suddenly arrive and explain they've had a tip off about the body.

Soon the police accompany Declan and Megan to the glamping site. Declan soon realises Katie is likely to have made the call. He confronts Katie and tells her he'll bring her down with him, so she decides to pack her bags and leave before he can array out his threats.

Elsewhere, Charity's confused when she finds Debbie clearing out her house. Debbie's evasive but admits she's not sure whether to go to the funeral. Charity tells her she must and wonders if her decision has something to do with Cameron. After she confronts him, he slips off to see Debbie and says he'll be supporting her - even though he has to sit with Chas.

Also, Nicola's still confused by Steve's behaviour and mind games when he returns from Paris with Bernice. 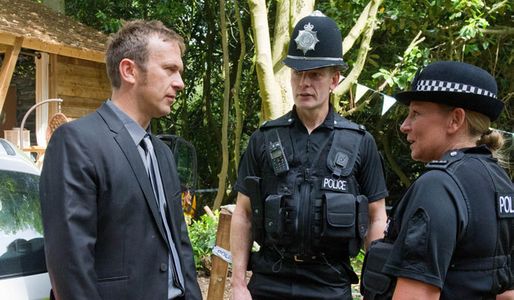 Emmerdale 14/10 - The police prepare to stage a reconstruction