Ross fakes his concern over Pete’s depression when Emma challenges him and is riled when he sees Debbie, Pete and the kids together in the cafe. Later, Ross hides a parcel from Emma and seems determined to get his mum out of the house. It’s clear Ross is up to something, but what?

A firm Debbie is keen to put distance between Pete and the kids and is defensive when Pete notices Sarah’s cough which leaves him saddened. Later, James covers for Emma when Pete realises she knows about his depression. Emma’s angry when Pete tells them about his earlier meeting with Debbie. Later at the doctor's, Doctor Bailey examines Sarah and suggests they do blood tests to be on the safe side. Debbie’s unimpressed when it is Emma who comes in to take the necessary samples and it’s not long before there is a heated confrontation between the two women.

Rakesh is adamant he isn’t going to reveal Kirin is Johnny’s real father. In the hospital, Vanessa snaps at Adam for being too optimistic over Johnny’s future. Whilst the doctor reassures her it wasn’t her fault she went into labour so early, but Vanessa continues to blame herself. It all becomes too much for Vanessa when she sees the incubator next to Johnny’s is now empty and immediately fears the worst.

David’s shocked to learn Pollard wants to put Cheryl the dog down. But can he stop him? Later, Marlon reaches out to Pollard but will he succeed?

As Laurel makes plans to move out, Marlon tells Diane she is handling their break-up better than he is, admitting he’s scared to be on his own again. David’s incredulous when Leyla defends Jai for knocking over Vanessa. 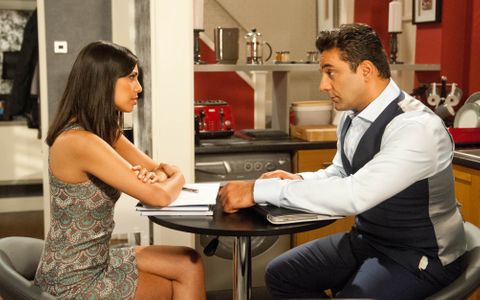