Emmerdale 14/1 - Will Tess ruin things for Paddy and Rhona?

Aaron gives the social worker a glowing review of Paddy and Rhona but at the school, Tess talks to the social worker but is unhappy to have been put in this situation. She forces a smile as she calls Paddy, Leo and Rhona the perfect family but it soon becomes unclear what she's going to say about them.

Rhona's confused when she hears a beep coming from Paddy's coat as his phone's on the counter. He lies that his second phone belongs to Aaron, who's baffled when Rhona tells him Paddy has his mobile. Paddy hands it to him with a pleading look on his face and knows he has a lot of explaining to do when Aaron warily accepts the phone. Aaron wonders why Paddy has a second phone. He comes under pressure when Aaron threatens to tell Rhona it's not his, unless Paddy tells him the truth.

Belle feels guilty about ignoring Zak when she sees how stressed he is, but the guilt soon dissipates when she sees Joanie. Zak chases after her suggesting they have a drink in the café and Belle's pleased her dad's chosen her over Joanie. Belle lies to Zak about the voices in her head and he's left guilty. She says she can't tell Lisa in case it causes another angina attack and Zak's left in a dilemma.

Bernice tells Kerry that Chrissie will be in charge of the salon when she's away. Nicola tells Jimmy she wants to focus on her career and she is going to a conference in Barcelona

Aaron's left reeling when Paddy tells him he's been having an affair with Tess. Aaron's angry he's betraying his family and Paddy knows he has to contain the situation. and explain that he doesn't love Tess and the adoption will make his life complete. Aaron's world is rocked by the affair but will he tell Rhona or even worse the social worker?

Kerry's annoyed Chrissie is in charge of the salon but when Chrissie proves Kerry's been exaggerating her illness Kerry soon is pushed into pulling her weight with the workload.

Belle's delighted to see Zak and Lisa together but they're taken aback when she admits she hasn't really been hearing voices. Zak and Lisa are both shaken as they gently chide Belle. She says that she just wanted them to talk to each other. Lisa asks Zak to stay for a cup of tea and both he and Belle are chuffed her actions have brought about a family reunion but is everything as it seems?

Laurel gives Nicola food for thought over her priorities and she soon has something to tell Jimmy. 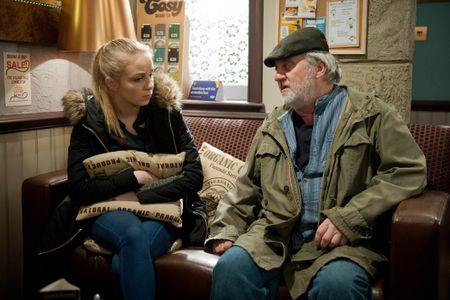