Emmerdale 14/10 - The police prepare to stage a reconstruction

The police prepare to stage a reconstruction of the night Robert was shot with Lawrence. But will Lawrence manage to accurately recreate the scene of the shooting? Later, when Chas has to go through the reconstruction, her opinion of where the shot came from contradicts what Lawrence said. And after making an admission she soon crumbles from the pressure and has to be taken away by Aaron. Meanwhile Adam is looking through the video he made for Johnny and is horrified to see footage that incriminates Aaron.

Priya and Rishi worry about Kirin, as he didn’t return home after a night out with Jai. During the reconstruction, a mortified Chrissie apologises to Rakesh for the attempted kiss the previous day. Later, the family are aghast when Priya admits she called the police on Jai. But soon Priya has cause to be disappointed in Rakesh and he is firmly in the doghouse. Meanwhile Rishi makes a major decision regarding Jai and the company going forward.

Pollard agrees to Leyla’s terms when she plans to increase bookings, but is unaware she is marketing him as the star attraction; people will pay to have Pollard chuck abuse at them. 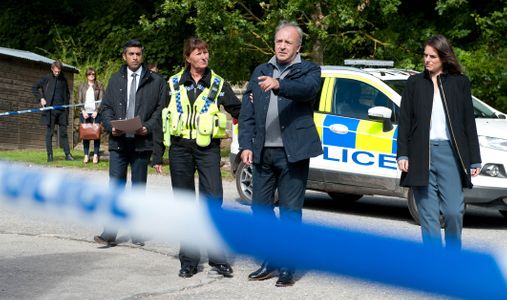