Amy and Kerry head to the docks whilst Amy holds Kyle in the back, the magnitude of the situation suddenly dawning on her. Val begs Dan to call Kerry, who denies they are up to anything, but Val hears Kyle’s voice in the background. Amy and Kerry wait for the ferry together and share an emotional goodbye.

Val, Pollard, Victoria and Andy all realise Amy has abducted Kyle, and try to track them down. Pollard knows they are at the docks, and together they hurry to get there in time, but will they make it?

Laurel reveals to Marlon that she could be in prison for three years. Marlon implies that Rhona is to blame for the carjacking, leaving her mortified.

A furious Val arrives at the dock and hits Kerry. Kerry lies and tells everyone Amy has already gone, but Val sees her look over at the ferry. Kerry pleads with them to let Amy go as the police and Joanie arrive. Will Amy get away with it?

​Marlon doesn’t know why Laurel doesn’t just agree to bend the truth to get a lighter sentence. Moira feels awful when she explains that she couldn’t persuade Ross to drop the charges and doesn’t know where he is.

​Elsewhere Rhona tells Paddy she is not ready to be intimate. Amelia finds £50 that Declan drops and thinks it’s a gift from Jesus, whilst Ali and Ruby are more sceptical over its origins. She tells them to keep their end of the deal and match her money. 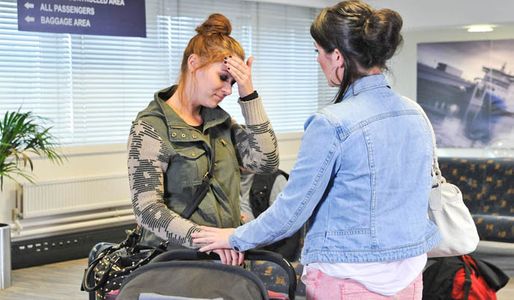