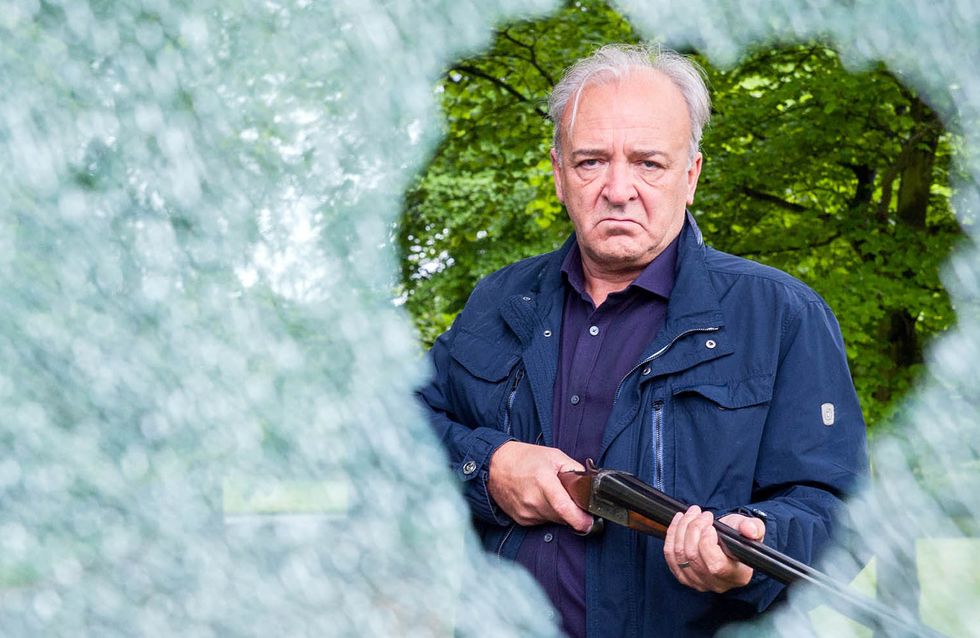 Lawrence pretends Bernice is staying with Nicola but Chrissie soon finds out she’s left him. She finds a letter Bernice has left but misunderstands the reference toRonnie thinking Lawrence has lied to her about him being her father. Meanwhile, Lawrence is devastated to learn Bernice was dropped at the airport and Andy’s in turmoil at having to hold his tongue to Chrissie. Chrissie confronts Ronnie and demands he admits to being her Dad.Under pressure, Ronnie snaps just as Lawrence arrives and Chrissie is left shocked with Ronnie’s confession.

Nicola pushes everyone who tries to help away. But when she accidentally knocks her pen behind the washing machine and gets her good arm stuck she realises just how vulnerable she is. Will someone come to Nicola’s rescue?

Aaron’s embarrassed when Charity walks in on him and Robert in the shower. Aaron starts to broach the subject of moving in together to Robert but they’re interrupted again, this time by a police officer who says there’s new evidence. David tries to wine and dine Tracy but Pollard and Jacob think he’s doing to much.

Lawrence is tormented by everyone's whispers, a horrible reminder of his time in prison. Lachlan and Chrissie try to reassure him they don’t care if he’s gay, but Lawrence snaps and kicks them out of Home Farm. Chrissie’s rocked when Ronnie admits he is still in love with Lawrence and reassures her he’ll speak to him. But Ronnie’s left heartbroken when a drunkLawrence threatens to shoot him, blowing a hole in his wind screen. Has Lawrence finally reached breaking point?

David’s gobsmacked to see Tracy looking stunning in the dress he bought but she feels self-conscious. They enjoy their date, kissing and bantering. Pollard warns David to slow down, but David insists Tracy’s the only one who makes his condition bearable. Jacob is silently devastated by his words.

The police tell Robert they have CCTV of him withdrawing a lot of cash on the day Ryan claims he was bribed. Robert covers but is clearly unsettled. Aaron asksRobert if he wants to get a place with him and is gutted when Robert says he has to think about it.

Dan tells Nicola to get over herself and start being nicer to people helping her. He offers to do physio with her, saying it’s for his paramedic training. She agrees and feels more positive.​​​​​