Leyla's puzzled to realise Carly has slept in her van. Brenda's grateful but a little guilty when Bob tells Carly she's no longer welcome. Later, Carly sees an opportunity to flog some perfume to Leyla. However, Leyla fumes when she realises what Carly has done. But in a twist to the tale, Leyla and Carly end up swapping sob stories. With Carly seemingly determined to fix things with Bob, could Leyla prove to be her saviour?

James is awkward as he comes downstairs after having spent the night with Emma. He’s torn when Emma reiterates his options, either come clean and risk losing Chas, or live with the guilt. Later, Moira tries to talk to James about Chas but is puzzled by his lack of enthusiasm. Meanwhile, Emma enjoys her power as she tells Chas she needs a word. James arrives and is alarmed to see Emma with Chas.

Chrissie's grateful she and Donny seem to be on the same page about Lachlan, but is Donny being straight with her? Elsewhere, Aaron's puzzled by Robert who is seemingly rattled by Donny’s presence.

Rishi is dealt a blow by Georgia but there is more bad news to come. On a double date, Finn's embarrassed when Victoria and Adam realise he's been lying to Darren to make them seem more compatible. 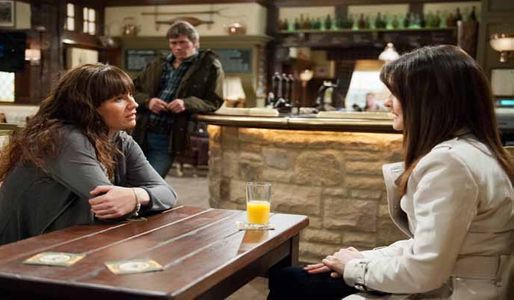