Sam wakes a drowsy Rachel for the mediation meeting but she rushes off to be sick. Outside, Jai is pleased to see his plan is working and tells an oblivious Sam that their mediation has been moved to later in the day but furious Rachel realises she’s been set up and Sam has to stop her from hitting Jai. Zak attacks Jai and warns him against messing with Rachel and Sam but has he made the situation worse? That evening, Sam grows nervous as Rachel blames him for everything that has happened with Jai and Sam’s soon left terrified by Rachel’s behaviour…

When Emma is caring and helpful it throws her once again into James’ proximity. Emma is thrilled at her closeness with James as he thanks her for helping but begins having doubts about divorcing her. Has Emma’s plan worked?

Andy feels guilty when Diane talks about the message she received from Victoria but is left suspicious about Robert. Aaron enjoys winding Robert up as he pretends to know where Victoria and Adam are but as Robert tries to distract himself by being passionate with Chrissie, he unwittingly drops Adam’s phone down the sofa.

Emma overhears a conversation between Chas and Debbie regarding Cain. 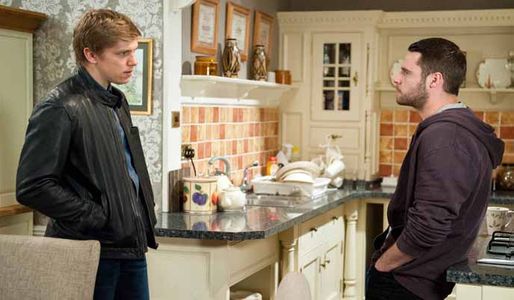