Cameron text Debbie and asks her if she'd going to the funeral but feels guilty when Diane suggests he pay more attention to Chas. Nonetheless, he later begs Debbie to go and tells her they'll be together soon.

Outside the church, Chas' suspicions arise when she thinks she sees Cameron at Debbie's and when she asks him he makes up an excuse. Debbie arrives but feels too guilty and during Jade's eulogy Chas confronts Cameron, asking him if her loves her and accuses him of sleeping with Debbie. Cameron stiffens.

Elsewhere, Nikhil's upset when he finds confetti from his wedding in his suit for the funeral. Full of sadness, he makes u with his dad before leaving to frantically search for his wedding album in the bin. David tells him Brenda's got it. Nikhil, overcome with grief, prepares to carry his wife's coffin.

Also, Nicola can't believe she'll be working with Steve and thinks he's only invested in Declan's business to get close to her. He's soon up to tricks when he changes a digit on the sort code for a bill Nicola has to pay for Declan.

Mid-prayers, Cameron confesses to Chas that he's been seeing Debbie for a few weeks, but warns her not to make a scene.

Nikhil's devastated as he reads his eulogy, before Chas gets up to read hers. But her grief quickly turns to anger directed at Cameron and Cain starts to cotton on.

Meanwhile, Nikhil goes to check on Molly and get some air. He's reluctant to reveal anything as Jai asks about his plans before telling him he'll always be there for him.

But later, Nikhil tells Declan he still wants to go to Toronto and will tell his family when he's ready.

Elsewhere, Steve's plan comes together when he watches Nicola panic about her mistake. When he offers his own bank card, she accepts and starts to see him through new eyes. 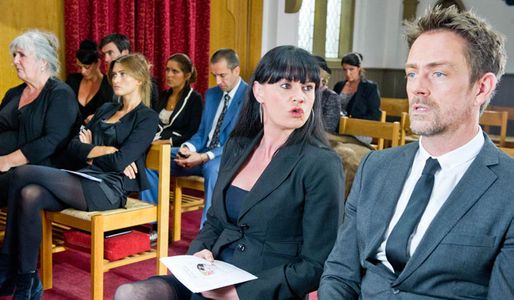