Rhona is distraught over the bad reference wondering who could have given it. Whilst Pearl and Paddy are both guilty to think they are responsible. Later, a guilty Pearl admits she told the social worker about Rhona's lesbian phase. Whilst Paddy's left feeling guilty as he is the one actually having an affair. (For info only; Later, Paddy's shocked when Aaron explains it was him and explains what he told the social worker.)

Chrissie tells Rakesh he needs a big gesture to show Priya she can trust him. He's bolstered by this and heads off, determined. But will it work or will it just complicate things?

Kirin struggles with Johnny, who won't stop crying but Adam can’t stay as he’s unable to take seeing them together. But soon Victoria intervenes knowing Adam needs to spend time with Johnny.

Diane tells Doug she felt a connection between Robert and Chrissie and later tells Chrissie she wouldn't stand in her way if she decided to get back with Robert but is thrown by her response. Chas is preoccupied with her relationship with Gordon and lies to Aaron when she plans a night away with Gordon. 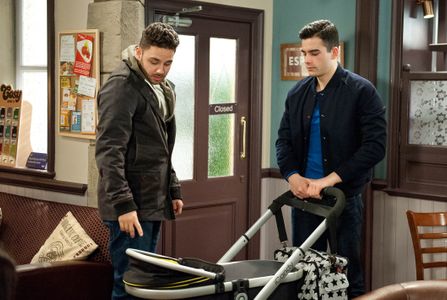