Debbie's convinced that Cameron has Sarah. In the pouring rain, Cameron breaks the window of Tug Ghyll and gets some car keys. But then he sees a police officer exiting the pub.

Andy and Moira are relieved to find Sarah unharmed but relief turns to fear when she tells them about Cameron. Andy tells Debbie to stay at the pub, while Chas bolts the door. Cameron is disguised and gets PC Harrison to follow him. We then see Chas changing a barrel - with Cameron lurking in the shadows.

As Marlon comes out of the pub kitchen, he's shocked to see Cameron emerging from the cellar. Cameron then slams the butt of the shotgun against Marlon and he staggers back through the cellar door, landing in the water unconscious. Cameron locks the door, heads to the bar and finds Debbie.

Elsewhere, Lindy tells Ruby she'll give her the money for the baby if she does it without Ali. When Sean finds Ruby with a bag, she tells him she's off to stay with a mate. But he tells her she can't just leave.

Also, Alicia admits to David that she won't be going to his wedding. 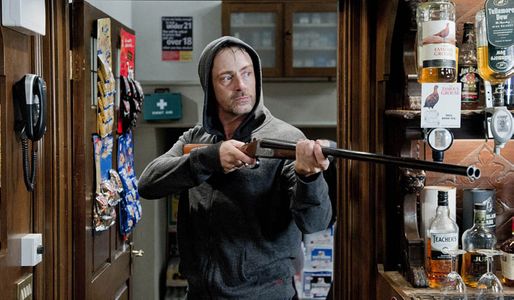