Emmerdale 15/11 - Rebecca Kisses Robert And Soon Diane Is On The Scene - What Has She Heard?

Kerry wakes in the factory, covered in chocolate and booze and panics,knowing she needs to fix this fast. On hearing Jai and Rishi coming she hides. How will she get out of this mess?

Aaron sees Rebecca and Robert together and can’t contain his jealousy. Robert swears there’s nothing going on. Meanwhile, Lawrence reassures Doug and Diane they won’t be evicted. Later, in the Woolpack back room, Rebecca seeks reassurance from Robert but Robert’s anxious about Aaron finding him with her. As they reminisce Rebecca kisses him but he pulls away explaining it’s all about keeping to the plan. Meanwhile in the bar, Chas asks Diane to go through to talk to Robert. Diane comes into the back room and catches them leaving Robert very worried what she’s actually overheard.

Megan asks Frank what he did to end up in prison. Will he tell her? A teary Bernice confides in Jimmy she feels a useless mother and Jimmy gives her a hug.​​ 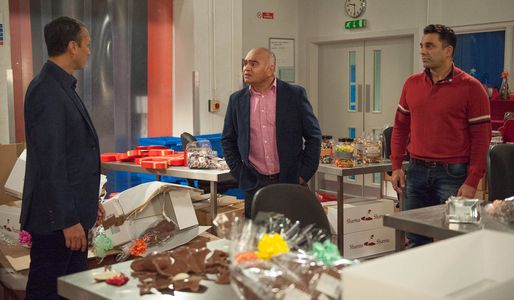