Revengeful Aaron breaks into the living room at Home Farm,freezing when he hears a noise. He’s relieved to see it's just Dog but he soon hears Rebecca and he rushes to the door taking the money from the safe with him. Rebecca notices the safe is open and empty but who will she suspect? Back at the pub, Chas and Aaron make amends but Rebecca walks in...

Paddy's miserable after receiving his decree nisi but is hopeful when a client, Lydia,arrives with her pet cockatoo and accepts his offer to take her out for a drink. Paddy’s soon left irritated at Chas and Pollard's judgement of Lydia but he’s also left bewildered when she suggests where they go on their date.

Zak's tells Joanie he needs to spend money on a laptop for Belle rather than their new flat.David's annoyed when too many Christmas trees arrive in the order but Frank's determined to sell them all. Tracy thinks she knows what's happened and confronts Leyla.

Will Aaron and Rebecca sort out their differences? Later, Liv's delighted when Aaron tells her they're buying Mill and Aaron seems happy everything is coming together until a drunken Moira comments on Robert and Rebecca's closeness…

Tracy’s plan to get Leyla to move out backfires when she tells Leyla Pete wants her to move in..

Paddy's flustered as he tells Rhona and Pierce the details about his date with Lydia and Rhona comes to the rescue resulting in a slap for Paddy from Lydia. She later apologises to Pierce for the fact she had to pretend to be Paddy's wife and he's happy when she's suggestive about making it up to him. Zak's unsure when Lisa hands him the money back.​​​​ 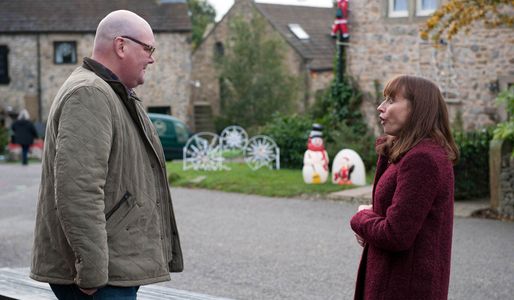