Victoria is chuffed Andy’s asked her to be best 'man'. Spirits are high until Robert arrives and learns Andy has been given his father Jack's wedding ring. It’s going to be melted down into two rings and Robert storms out in a fury. Aaron tracks down a furious Robert who climbs into his car telling Aaron to drive anywhere. Aaron tries to get to the bottom of Robert’s upset. Soon Robert's uncomfortable when Aaron takes him to a gay bar. Robert’s frustrations over Andy continue to build, so later he makes a revengeful phone call.

Lisa is relieved Belle has agreed to counselling but Zak doesn’t reveal the full story of what she did. Keen to make amends with Edna, Zak offers to do some free work for her, Zak tells Belle although he is cross with her, he loves her even more. Paddy interrupts the pair and admits he's so busy they need some help at the vets. Belle's not thrilled to realise he means her. But soon it is clear she is struggling again. (Embargoed: Belle hears Gemma’s voice again.)

Moira's nervous about the inspectors' visit and Ross causing a commotion over rent doesn’t help things. Ali tells Rishi she wants Jai to bring Archie back. Will Rishi agree to speak to Jai? Val's frustrated regarding booking Daniel Craig for her Christmas light switch on and Pollard despairs when she announces a casino night at the B&B for her charity foundation. 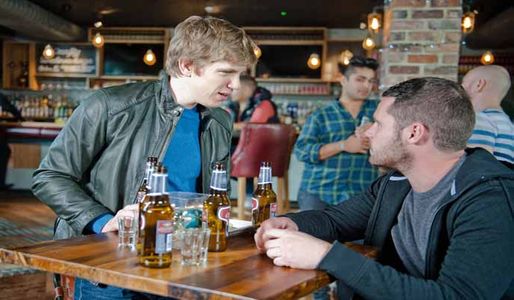