Emmerdale 15/9 - Priya's Past Comes Back To Haunt Her

Lisa’s upset to be refused a loan from the Sharma’s and Charity offers to pull a robbery to get the money, but Lisa insists she doesn’t want her going to prison. Wanting to help,Lachlan brings Lisa to see Chrissie but when the meeting doesn’t go to plan, an angry Lisa loses her rag and clocking Chrissie’s convertible on the driveway comes up with a plan...

Tracy gets upset after numerous arguments with David and announces the wedding is off. Pollard finds Tracy crying and she confesses what she did to Frank. Pollard calls the police but will he turn Tracy in and how will Frank react to find out what has happened?

Priya’s stressed about the open day especially when a woman makes a ridiculously low offer for the site. Worried Priya makes herself sick in the bathroom...

Adam asks Liv to watch the scrap yard saying she can have a go on the quad bike.

Lisa asks Charity for her help but will she? Chas hands Lisa £5000 but Charity’s curious where she got the money from.Lisa heads to the hospital but is devastated to learn Belle’s already gone. Priya’s tempted by Rishi’s offer to invest in rebuilding the Mill but when she goes to tell Leyla the news, she faints. Leyla realises her eating disorder has flared up again and Priya admits she fears Rakesh is having an affair as he’s lost interest in her. Leyla insists Priya goes to see her counsellor.

Adam has a go at Liv for joyriding the quad after she accidentally covers Paddy in sheep muck. Liv’s thrilled Chas has her money to buy the jeep at the scrapyard and thanks Chas for looking after the cash leaving Chas feeling guilty. Robert’s uneasy about Chrissie asking Victoria to cater for the launch, frustrated he can’t tell her why not to trust Chrissie. Frank tries to make it up with Tracy but fails. She asks Pollard to give her away if she does get married. 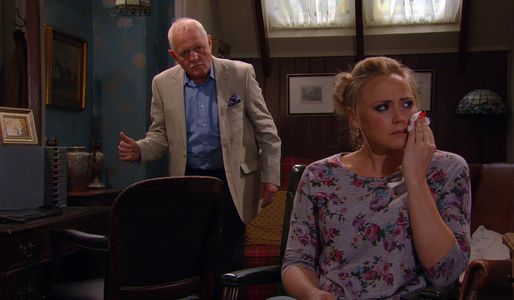