Belle is frightened of what is to come but later that afternoon a frightened Belle reluctantly accepts she needs help. But Lisa is close to the end of her tether as they wait for a doctor to arrive. Doctor Scott arrives but will Belle open up and reveal what has been happening?

Finn is down about his Mum and blames Moira for her departure when she reveals Emma came to see her. Ross feels for Finn, who refuses to live with Moira anymore. Both are at a loss, not knowing what to do next. Later, Ross is left troubled when James suggests he speak to Emma, hinting she will listen to him above anyone else. Will an intrigued Ross reach out to Emma following on from James’s cryptic words?

Tracy knows she’s in trouble when Val finds her helping herself to food after having bunked down overnight in one of the B&B rooms. When Val threatens calling the police Tracy offers to work off her bill at the B & B. Tracy later tries to talk to Sam but he’s not interested. However, soon he and Val are shocked when Tracy shows the extent of her problems.

A raging Ali tells Charity is at the root of their problems and how she now believes Rachel is dead, now she knows she’s not been in touch regarding Archie. Ali venomously insists she hopes Charity is locked up for what she has done.

Lisa tries to apologise to Chrissie and is later grateful when Chrissie offers her some support. Cain is menacing when he warns Sam to do right by Charity in court. Charity is relieved when Cain agrees to look after Noah if she is sent to prison. Cain thanks Kirin for saving his life and confirms his debt is now paid. 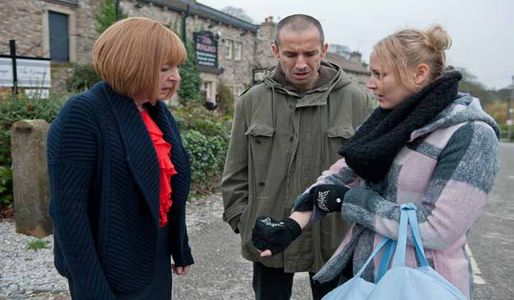