Diane's concerned for Andy who won't discuss the funeral and insists on going to work. Robert feels guilty when Andy asks him to plan the funeral and a torn Robert tells Aaron he won’t be seeing him for a while. Adam later apologises to Aaron regarding the scrapyard and asks him what's been bothering him. Will Aaron confide in his friend?

Emma gets ready for her interview while Finn and Ross discuss Adam and Aaron's disaster at the scrapyard. Meanwhile, Moira suspects the scrapyard foul play was down to Val but soon realises Emma is the more likely suspect…

Alicia is excited about Chrissie's farm shop proposition and is full of anticipation, waiting for her Valentine flowers. David's miffed they haven't arrived yet but is left confused when a CD and card arrives instead. Who’s behind the missing flowers and who’s Alicia’s secret Valentine?

Lisa feels guilty believing she's failed Belle and heads out to visit her, carrying a heavy burden. Ali has a go at Laurel for being late and sends her back to work, leaving Laurel feeling oppressed. Marlon gives her a Valentine's gift and she's surprised to see its alcohol. 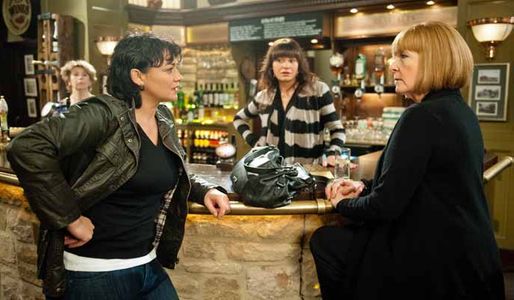