Sandy finds Pearl's IOU notebook and confronts her over stealing money from the vets. Soon Pearl deliberately creates a diversion at the vets, in an attempt to prevent Paddy and Rhona from attending a meeting with the bank. Later Pearl tries to stop Paddy and Rhona from accessing the online account. Despite Pearl’s attempts they succeed in logging onto their account and soon Paddy wants to question Pearl, who comes up with a big lie.

Moira's floored when Ross explains Vanessa may have breast cancer. Later, Moira reassures Vanessa she will be there for her but Vanessa hurries off. Kirin is soon heartbroken when he asks Vanessa for another chance but she refuses.

Chas tells Andy he's insulting Katie's memory by what he is doing. A brooding Andy kisses Tracy and leads her upstairs but Tracy is beginning to feel used. Andy receives a call from Sarah's school informing him there are still tickets left for her play. He asks for two and tells Tracy she's coming too…

Chas is concerned about the amount of running Aaron's doing. Alicia's awkward towards David but he and Leyla are happy Alicia seems brighter but David worries about Lachlan's return tomorrow. Belle tries to put on a brave face. 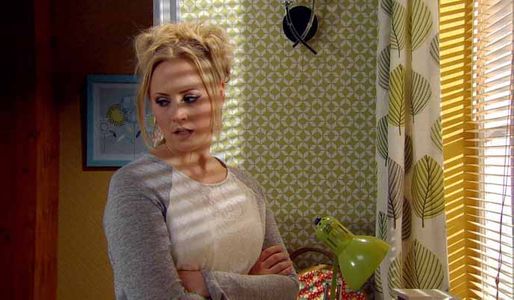