Chrissie’s at a loss when Lachlan refuses to go to counselling, but a smug Donny offers to help. Donny soon gets Lachlan on side with underhand methods. Meanwhile, Robert plans a night with Aaron but quickly changes his mind and returns home. Is Robert is unsettled by Chrissie and Donny’s relationship? Later, it’s Donny’s turn to be unsettled when he takes a secret call and insists to the caller, he needs more time.

A guilty James can’t bring himself to tell Chas he slept with Emma but soon finds himself confessing to Moira. Moira is insistent he needs to tell Chas before Emma does knowing Emma will have her own agenda.

Ali and Dan return from visiting Sean in hospital and it’s clear the situation is bleak. Ali’s determined to split her time between visiting Sean and working but she’s already feeling the pressure.

Belle’s disheartened, having no job or school to go to and Lisa’s worried when Belle suggests getting a job in Leeds and renting a room in the city. Rishi’s saddened by news regarding Georgia.

After discovering the truth about James and Emma, a hurt and furious Chas insists James leaves. Outside the Woolpack James and Emma argue and Pete questions if Emma wants James back. Soon James is caught up in a danger of his own.

Ali suggests she and Rachel do a job share so that she can see Sean when necessary but is thrown to discover Rachel’s on a better financial deal. Ali accuses Rachel of using Sean’s accident to get more money.

Lachlan’s impressed when his dad Donny stands his ground in the village, first with Paddy and then with Cain. Later, Lachlan proudly tells Lawrence about his day with Donny but Donny’s cool composure clouds when he receives a mysterious text...

As Lisa worries about her daughter, she asks Jai if Belle can fill in for Ali but he explains the post has been filled by Rachel. 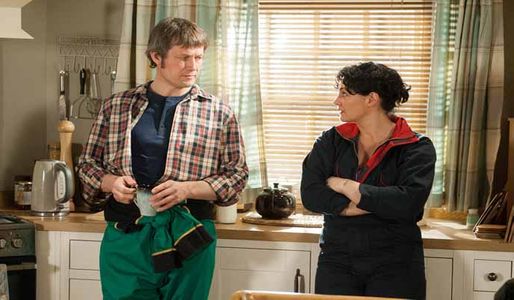