Pete asks Ross to be an usher and Ross accepts. Debbie’s blood runs cold when Moira reveals she saw her and Ross kiss. Breaking down Debbie confesses the affair has been going on for months and her heart sinks when Moira tells her to make her choice today. Elsewhere, Finn is left stunned when Ross confirms things aren’t over between him and Debbie. With Finn and Moira knowing about the affair how long before it comes out?

​Bob questions Ross about Carly’s whereabouts but when he gets nothing back, Bob reveals he knows he was part of the truck robbery too. Val’s furious to discover Carly’s not been charged and has also runaway, she makes a beeline for Bob…

James is shocked after Emma suggests a divorce party. James bumps into Dr Bailey and introduces himself but is left saddened when uncomfortable Bailey says he’s going to break things off with Emma because she’s too intense. James feels sorry for Emma but can he bring himself to tell her the hurtful truth?

Laurel can barely contain her relief after receiving a letter from the STI clinic letting her know that all her tests are negative. Later on Chas notices Marlon’s coolness with Laurel and offers him some advice, which leaves him feeling guilty.

Moira reveals another visiting order from Charity for Cain but she puts it in the bin.

Pete’s amazed by Debbie’s beauty when he catches her in her wedding dress and she falls into his arms and weeps with guilt but blames it on wedding stress. Debbie tells Moira she’s chosen. Meanwhile, Ross waits for Debbie and has a bad feeling as to why she hasn’t shown up but when she finally arrives and tells him she’s chosen Pete, how will Ross react and will Debbie really stand by her decision?

Emma’s full of contempt towards Dr Bailey, unable to control herself she angrily trashes his office. Later, James checks in on Emma and she then regrets what she’s done but can she get out of this?

Laurel’s touched when Marlon comes home early from work to cook for her but the two sit in silence over dinner before reminiscing over the past. Desperately trying to make things right she’s left hopeless knowing Marlon’s miles away and he makes a confession.

Bob wants to leave the village but ends up declaring his love for Brenda. Will he stay? 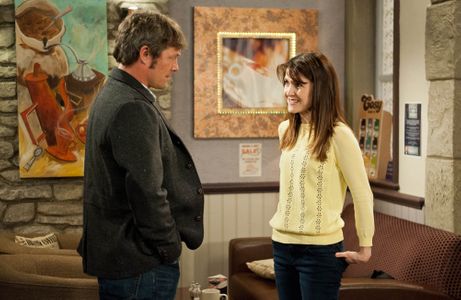