Laurel goes to the shop for headache tablets, leaving Ashley more suspicious. He decides to confront her but she’s angry and denies it. She’s adamant she’s going to the scan on her own and Ashley believes she’s in denial. Later, Gabby’s skiving school at Mulberry with a group of friends, she searches the house for booze, but is guilty when Sandy catches her. Ashley is furious when he discovers it was actually Gabby’s booze he found, not Laurel’s. He’s devastated to have thought the worst of Laurel.

Zak bumps into Lisa outside the cafe, he tells her he wants to be there for his family and is hopeful when she says she’ll think about it. Zak’s aware something’s going on when Belle and Sam make plans to have a meeting. He decides to confront Lisa about the secret meeting so heads over to Wishing Well. But will Zak end up rubbing salt into Lisa’s wounds?

Rishi and Megan begin to believe Jai’s on a bender. Chas refuses to talk to Zak about Aaron, not wanting to be disloyal to Lisa. 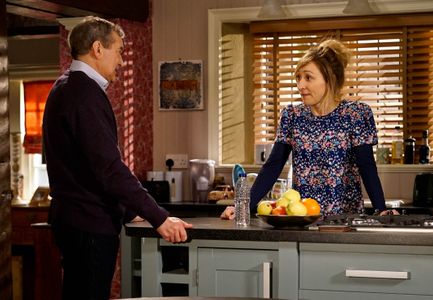