Aaron is distressed admitting to Chas he thinks he was a coward for not telling Gordon what he thought of him. Jacob’s disappointed when David tells him he’s not attending the Chemo with him. But Tracy arrives and takes matters into her own hands.

Vanessa notices Rhona and Pierce’s intimacy as Pierce shows her the flat he’s found. Pierce is intrigued byVanessa’s reaction to a photo of Kirin on her phone and his suspicions are piqued. Later,Pierce slyly takes Vanessa’s phone, on a mission to find Kirin.

Cain gives Moira a mini break for their anniversary. Holly’s worried when Moira’s determined to get the tickets back from Charity. Priya’s shocked when Rakesh tells her the firm want him gone. He has a go at Pierce for taking his job. Harriet’s shocked when Ashley tells her he wants to be her curate at the church. Ashley suggests naming the village hall in memory of Edna.​ 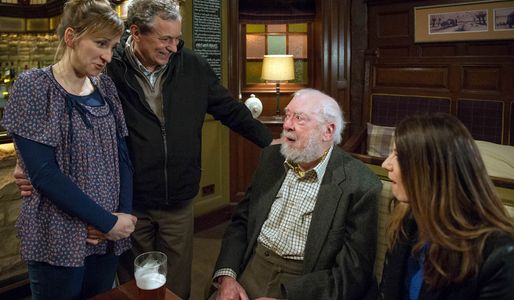 Emmerdale 2/5 - David discharges himself from hopsital

Emmerdale 23/5 - Tracey moves in with the girls