Emmerdale 17/01 - Nicola Finds Out The Truth

Nicola's determined to find out about the insurance money and confronts Rakesh and Priya when she sees them even suggesting Rakesh started the fire. On their way home, Rakesh and Priya see Ronnie and advise him to keep quiet about the fire as it could implicate him too. Ronnie reluctantly agrees, however, later, Nicola's shocked when Ronnie goes to see her and tells her Rakesh started the fire deliberately. Will Nicola go straight to the police?

Finn's worried when Kasim calls and wants to take him and Nathan for a drink but he agrees. Tracy despairs as Finn offers Nathan cash togo on a date with him in the hope of winning Kasim back. Will Finn’s plan come off?

Aaron's irritated at how much time Robert's spending on the business plan for Rebecca. Chas is worried about Aaron and she warns him about being jealous and suggests he talk to Robert about his insecurities. Will he take his mums advice?

Rhona apologises again to Pierce for upsetting him, saying she won't go out with the girls anymore.​​​ 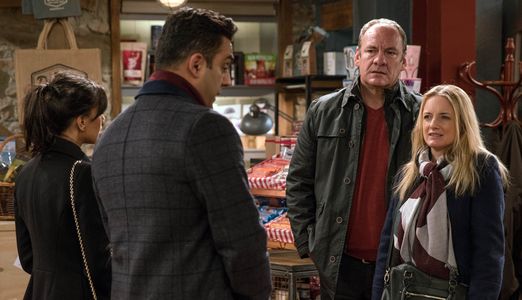 Pascale Day
…
Emmerdale
From hair ideas to outifts, look no further for your daily inspiration