Lisa feels guilty about keeping Zak in the dark, but he knows she’s keeping something from him. Elsewhere, Sean finds Belle drinking at Gemma’s shrine and is worried about her behaviour. Zak urges Cain to tell him what’s really happening, but Cain is distracted when he sees Belle and Sean in the distance. Will Belle tell Sean the truth about Gemma, or will Cain stop her?

Priya meets Jay for lunch when she collapses, hitting her stomach on a table. David hears the news, but will the true extent of her eating disorder finally come out? What could happen to her unborn baby?

Alicia is suspicious when Leyla is desperate to speak to Jacob. She overhears them talking and iss seething to find out the truth about Jacob’s missing money. Will Leyla be able to worm her way out of trouble?
​
Elsewhere, Seb confides in Ruby about his insecurities over becoming a father. 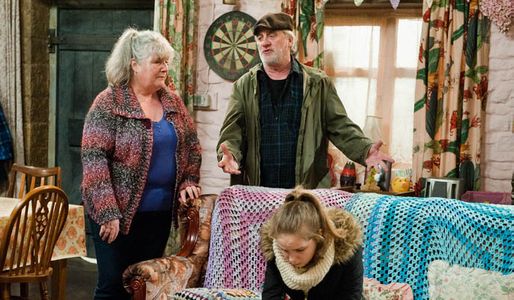 Emmerdale 03/10 – Lisa checks herself out of hospital