Liv accuses Aaron of being a liar, she wants some answers about her dad. Aaron struggles to tell Liv what Gordon did to him and he's emotionally exhausted as he finally says it aloud. Alone, Liv snoops in Chas' bag and finds her phone. Seeing Gordon's address, Liv sneaks out, determined. Chas and Aaron are horrified when they realise Liv's gone to find Gordon. Aaron heads off with Zak to find his sister as Sandra arrives …

Laurel's determined to have a good time at her hen do and even suggests to Harriet she stay after she accidentally walks in on the party in full swing. Meanwhile, Ashley visits Doug and appeals to him to be there for Laurel and is later relieved to hear he's gone to make his peace with his daughter. Harriet's suspicious at Laurel’s lack of drinking and guesses she's pregnant. Will she be able to keep this to herself?

Charity's taken aback by Ross' demand for Debbie's number. She goes to see Cain at the garage and uses Andy as an excuse to try and get her number off him but Cain sees straight through her. Meanwhile, Andy and Chrissie are awkward around each other, the sexual tension is obvious.

Bob arrives at Ashley’s stag do dressed as a human Buckaroo and is touched when Ashley asks him to be his best man. The men play twister as Doug arrives to tell Ashley he knows about the pregnancy. Ashley is concerned at his exasperation. Meanwhile, Doug tries to see his daughter to make amends but will she forgive her dad the day before her wedding?

Liv questions Gordon over Aaron's allegations and he denies everything. She's in turmoil as he tries to get her on side. Meanwhile, Aaron's frustrated as he's stuck in roadworks, desperate to get to his sister. At Gordon's, Liv comes rushing out and Aaron hopes for the best.

Chas keeps on at Sandra until she finally admits she knew about Gordon abusing Aaron. Chas is sickened by Sandra's admission and dismayed when she refuses to give a statement to the police. Chas pleads with her asking what she would do if it was Liv.

Ross and Charity call Debbie's number but are thwarted. Andy and Chrissie agree to keep their trysts a secret for the time being. The hen party mistake Ben the vicar for a stripper until Harriet tells them he's marrying Ashley and Laurel. 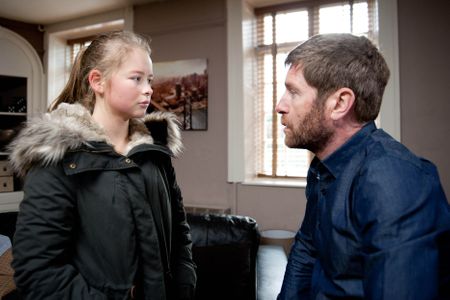