Sam's nervous as Rachel is determined to have it out with Jai today after Sam's recent revelation. Later, at Amba's party Rachel refuses to leave Archie with Jai, telling him he's not safe after what he did to Charity. Jai forces Rachel to go to the factory with him, saying there's a problem but Sam is wary. At the factory, Rachel tells Jai she wants full control of Archie's life, lying she's prepared to sacrifice Sam if necessary. But a composed Jai takes Rachel by surprise and soon she is trapped, alone and screaming…

Robert tells Chas and Aaron he's moving back in with Chrissie. Aaron tells Robert he’s in denial over being gay and insists in the future another guy will come along. At Home Farm, Lachlan and Chrissie are back after a counselling session. Lachlan blackmails Robert, wanting his laptop back. Will Robert find himself being manipulated by his stepson?

Rakesh realises he's overreacted when David tells him there's nothing between him and Priya and reassures David just how solid he and Priya are. Later, Rakesh apologises to Priya for his jealousy and has more than one proposal for her.

Alicia comments to Rakesh about how good Kirin is with Amba. David is envious of Rakesh’s role in Amba’s life. Kerry complains about Dan obsessing over his business course but is irked when she’s mocked by Brenda and Bernice and later has an announcement. Ross insists to Debbie he managed to talk Charlie down. Cain's suspicious as he watched the pair talk and intrigued to later clock Ross training hard.. 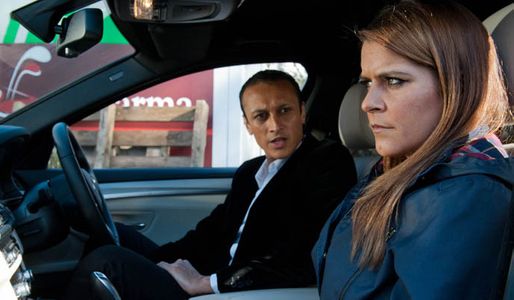