Harriet notes Ashley’s nerves ahead of the memorial and does her best to reassure him. At the church, the memorial begins, but will Ashley be able to hold it together when he gets names mixed up?

Harriet agrees to take Sandy to the hospital for his check up so Ashley can focus on the memorial but Ashley insists he will book a taxi to collect Sandy when he is finished. At the hospital, Sandy bumps into some youths, who notice his expensive compass. Later, when Sandy’s taxi hasn’t arrived, he decides to wait for a bus, only to be greeted by the earlier youths...

Rishi is angry with Jai for his behaviour. Jai tells Rishi about Megan losing the baby but Rishi is conflicted, aware that his son needs him, but equally ashamed of what he has become. Later, at the B&B, Rishi and Priya approach Megan about her having lost the baby, she asks them to be discrete about the miscarriage. Later at the factory, Rishi tells Jai that he can’t think of one thing he likes about him, has Jai really lost all the people he cares about?

Pete won’t talk to Debbie about what happened with Ross and she worries he is punishing her and they won’t be able to move on until he opens up. Debbie decides to go to the memorial, but with Emma fuming, is a confrontation on the cards?

Doug learns Laurel is hoping to rent a flat with the proceeds of her mother’s will but will she be disappointed when she learns what her mother left her? Leyla is left reeling when Megan tells her she will have to wind down the business. 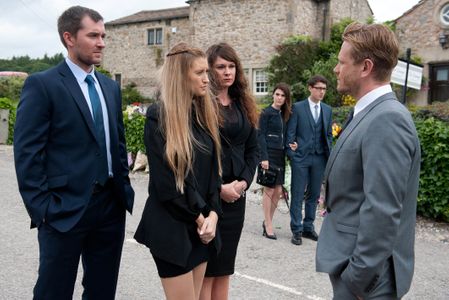