Gordon drops Chas off after their night together and asks her to consider him buying Diane's share of the Woolpack. She lies that she has a dentist appointment as an excuse to meet Gordon again but it soon backfires when Aaron follows Paddy’s car thinking he’s meeting Tess again. He’s shocked when he sees his mother get out and decides to follow her but there’s an even bigger shock in store for Aaron…

Kirin’s not coping well with fatherhood and feels jealous of Adam’s bond with Johnny. How will Adam feel when Kirin demands he stay away from his son?

Leyla returns Rakesh's cheque and says that a wedding isn't the way to get Priya back. Priya's stunned when Rakesh admits he kissed Chrissie. Will this be the end for the troubled couple or will Priya reward Rakesh’s honesty?

Robert asks Victoria to persuade Diane to sell her share of the pub to him. Victoria points out that he only wants to buy it to be closer to Aaron. 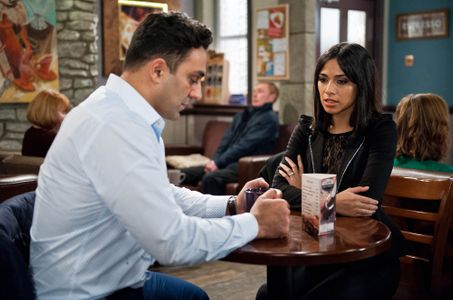