Marlon’s alarmed when Liv tells him Paddy is still in love with Rhona and Pierce is furious to overhear Marlon discussing his suspicions about Paddy with Bob. Paddy tells Rhona he’s got an offer she can’t refuse. Rhona thanks Paddy for being generous and Pierces’ jealousy builds especially when they return to yet more flowers!

Is Lachlan deluded over his future? Rebecca urges Chrissie to take the fall for Lachlan. Chrissie takes the phone but will she confess?

Megan’s put out when Frank sneaks out early, making excuses. Will Frank lose his lady over his past? Carly helps Brenda flog some cream but warns her it’s knock off junk.​​ 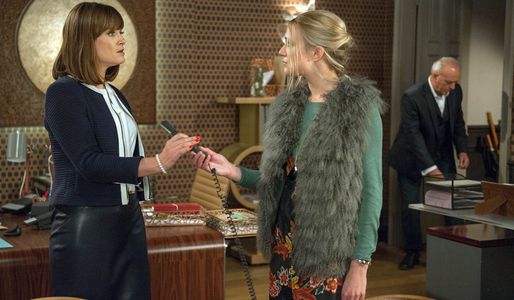 Emmerdale 06/5 - Chrissie's on a mission