Emmerdale 18/12 – Lawrence shows the extent of his reach

Robert's uneasy when Lawrence hints he has his own plans to deal with Ross and soon the Barton’s realise something is awry. The local abattoirs are rejecting their business, there’s an unannounced inspection at the garage and a tax enquiry occurs For It’s clear foul play is at hand. It is Pete who makes the connection their family is being targeted due to Ross. And as Ross tries to defend himself, Lawrence reveals it is he who is behind the Barton's troubles and warns they will continue until Ross admits the truth. But just how far will Lawrence go to expose Ross?

Vanessa grows frustrated with Belle's poor attitude at work and suggests Paddy has a word with her. Edna arrives and tells Pearl about her missing brooch and a paranoid Belle, (Embargoed: spurned on by 'Gemma') snaps causing Vanessa to hastily intervene. Later, Paddy finds Belle crying and is thrown when she tells him what Vanessa has said to her.

An apprehensive Kirin tells Rakesh that he doesn't want to go to uni anymore and a disbelieving Rakesh thinks Vanessa is to blame. In the factory, Rishi suggests Jai thank Ali for her birthday gift, leaving Jai to swallow his private guilt. Pollard grows frustrated as he accepts deliveries for the casino night, roping David in to help. In the Woolpack, Val tries to sell tickets to the casino night.

Ross returns home to find Lawrence throwing his belongings into a fire including a picture of Donna. Ross goes to attack Lawrence just as Robert arrives who is forced to pull them apart. But when Lawrence finds Ross's phone, it’s clear he’s hit a nerve. Lawrence smiles – enjoying seeing him sweat. Lawrence passes the phone to Robert, urging him to destroy it, but Robert is conflicted. Robert finally makes a decision and drops the phone on the floor, before smashing it. Later it’s clear all is not as it seems but can Robert end this dangerous feud Lawrence now has with Ross?

Pearl arrives to a poor turnout at the casino night but is quick to place her first bet on the roulette table. She is thrilled to win but disappointed to learn it’s not real money. At the Woolpack, Doug relishes in Val's failed casino night but Diane urges him to show his support. Val, meanwhile, tries to save the night, eager to impress a local journalist. But can Val pull it round or could Pearls winning streak make things worse?

Zak questions why Paddy sacked Belle but is shocked when to hear the reason. Zal later confronts Belle and is at a loss over her behaviour. Rakesh tells Priya he's scared for Kirin's future and worries to hear Vanessa and Paddy joke about her future wedding. Nicola agrees Bernice needs to move out but Jimmy is thrown he has to break the news to her. 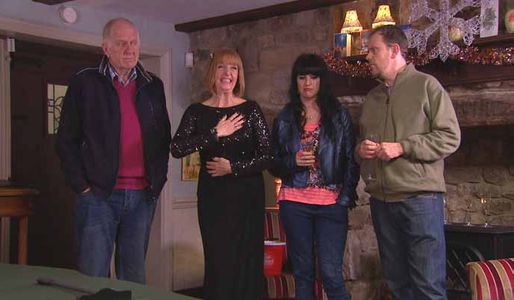